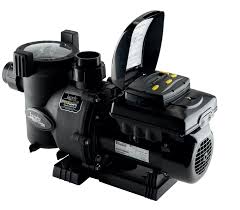 I put a new control board into a Jandy Aqualink RS 6 that was about 15 years old in Huntington Beach yesterday. I am replacing the entire equipment system and originally I was going to install all Hayward products which I really like, including an Ecostar variable speed pump. ?Once I realized I had to replace the Jandy board, and would have the latest software revision in the box, I wanted to use a Jandy variable speed pump, because although the Ecostar will interface with the Jandy ?aqualink, a Jandy VS pump does it so much smoother. ?I picked up an E Pump, which is based on Jandy’s stealth series, but it was just too big. There was no way I could wedge it in. ?I then tracked down a Jandy (zodiac) VSFloPro. ?It dropped in beautifully as a direct replacement for the 2 hp whisperflo I removed, and interfaces perfectly with the Aqualink RS8 system. ?The extra base that ships with the FloPro pump sets it up to align perfectly with the existing intake plumbing.