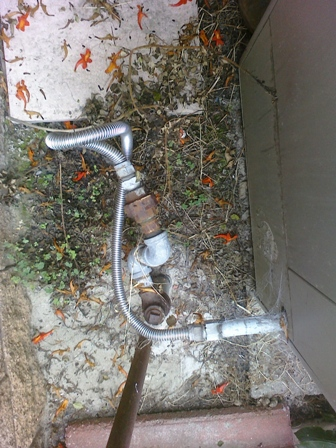 I’ve decided to write summaries of pool repairs and new equipment installs to give pool owners in Orange County a better idea of the types of services I offer. ?This morning I replaced a leaking pump seal on ?a Pentair Whisperflo WFE-6 pool pump in Huntington Beach. ?This is a 1.5 horsepower pump. ?The likely cause of the seal failure was overheating, due to a leaking backwash valve. ?When the system was running, water was being sent directly to the sewer, so the pool was loosing 2″ of water a day with the pump only running 2 hours each day. ?Once the pool water got low enough, the pump would not get enough water and overheat. ?I also replaced the wiring from the time clock. ?I was surprised to see that whoever had upgraded this pump 8 or 10 years ago had re-used the old conduit and wire, which was about 2″ too short. ?So the last two inches into the motor the wires were bare and unprotected. This was an electrical accident waiting to happen. ?I also extended the bonding wire to the back of the motor, it was missing.

The black Pentair ABS slide valve for the filter backwash had a bad o-ring, which when replaced solved the leaking problem.

Other issues not addressed today were the old ortega valves used to switch between pool and spa. ?These were extremely hard to move, even though one of them was rebuilt recently according to the owner. ?The best move here would be to replace them with the newer style Jandy type valves, which would also allow for mounting an actuator if pool automation was installed.

This system would benefit from automation , because the pool equipment is in the back corner of the yard. ?Instead of having to get out of the spa and walk over to the equipment (probably in the dark), battle the sticky ortega valves, shut off the heater and then the pump at the time clock (keeping in mind that all that is separating your wet hand from 220 volts of electricity is a thin plastic shield), the owner could just go inside the house and relax, knowing that the timer on the system would automatically shut of the heater and pump and change the valves back to pool mode for the next day’s circulation.

Another issue of concern was the flex line on the Pentair Minimax NT heater. First, the heater should be plumbed in with pipe, not flex, and second, it was only 1/2″ and looked like a pretzel. 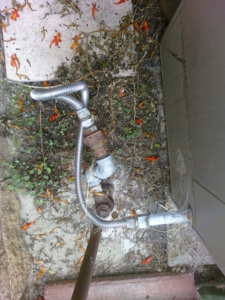